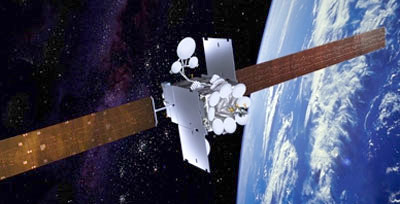 Inmarsat ordered three Ka-band Inmarsat-5 satellites in August 2010 from Boeing for about $1 billion to deliver faster broadband to its commercial and government customers by end-2014.

The fixed-price contract, with options, calls for three BSS-702HP commercial spacecraft that will operate in geosynchronous orbit with flexible global coverage.

Each Inmarsat-5 satellite will carry 89 Ka-band beams that will operate in geosynchronous orbit with flexible global coverage. The satellites are designed to generate approximately 15 kilowatts of power at the start of service and approximately 13.8 kilowatts at the end of their 15-year design life. To generate such high power, each spacecraft's two solar wings employ five panels each of ultra triple-junction gallium arsenide solar cells. The BSS-702HP carries the xenon ion propulsion system (XIPS) for all on-orbit maneuvering. When operational, the Inmarsat-5 satellites will provide Inmarsat with a comprehensive range of global mobile satellite services, including mobile broadband communications for deep-sea vessels, in-flight connectivity for airline passengers and streaming high-resolution video, voice and data.

The Boeing satellites will provide Inmarsat with the ability to adapt to shifting subscriber usage patterns of high data rates, specialized applications and evolving demographics over a projected 15-year lifetime. In a separate arrangement, Boeing has also entered into a distribution partnership with Inmarsat to provide L- and Ka-band capacity to key users within the U.S. government.

The Inmarsat-5 spacecraft are compatible with the Ariane, Sea Launch, Proton and Atlas launch vehicles. Launch services were procured by Inmarsat.

In October 2013, Inmarsat ordered a fourth satellite as a spare.