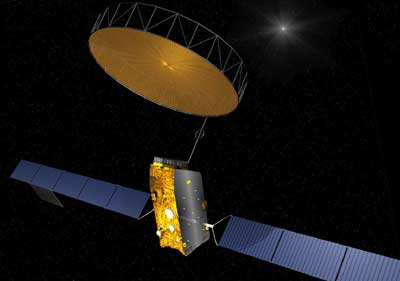 Inmarsat-4 is the fourth generation of satellites for the London-based global mobile satellite communications operator Inmarsat.

Designed to be around 100 times more powerful than the present generation and to provide a ten-fold increase in communications capacity, the satellites will support the new Broadband Global Area Network (B-GAN), to be introduced in 2004 for internet and intranet solutions, video on demand, video-conferencing, fax, e-mail, telephone and high-speed LAN access. Two of the satellites were launched in 2005 while the third remained on the ground as a spare until 2008, when it also was launched.

As prime contractor, Astrium delivered both the platform (based on the high-power Eurostar-3000GM version of Astrium's Eurostar series) and the payload, including the on-board processor.

In addition On Inmarsat-4 F3, a Wide Area Augmentation System (WAAS) navigation package operating in C-band for uplink and L-band for downlink provides precision Global Positioning System-based guidance information to aircraft at thousands of airports and landing strips that lack such a capability today.