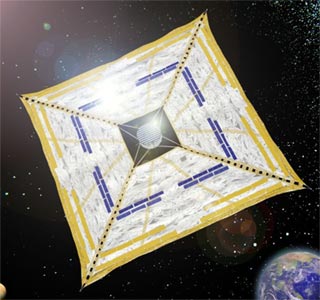 The IKAROS (Interplanetary Kite-craft Accelerated by Radiation Of the Sun) is a experimental a solar sail. It is the world's first solar powered sail craft employing both photon propulsion and thin film solar power generation during its interplanetary cruise.

IKAROS was launched together with Planet C (VCO, Akatsuki) from the Tanegashima Space Center using the H-2A-202 launch vehicle. After separation from the carrier rocket, it spun at up to 20 rpm, deploying the membrane and generating solar power by means of thin film solar cells (minimum success level) within several weeks. Acceleration and navigation using the solar sail will then be demonstrated (full success level) within half a year.

The shape of the membrane is square, with a diagonal distance of 20m. It is made of polyimide a mere 0.0075 mm thick. In addition to the thin film solar cells, the steering devices and dust-counter sensors are fitted to the membrane. The membrane is deployed, and kept flat, by its spinning motion. Four masses are attached to the four tips of the membrane in order to facilitate deployment. Deployment is in two stages. During the first stage, the membrane is deployed statically, and during the second stage, dynamically. This deployment method can be realized with simpler and lighter mechanisms than conventional mast or boom types as it does not require rigid structural elements.