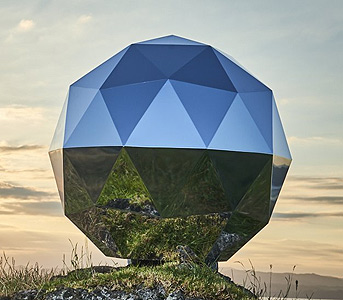 Humanity Star is a highly reflective polyhedron launched on the It's a Test and Still Testing maiden flights of the Electron rocket. It was designed and built by Rocket Lab specifically for this mission.

It is a bright, blinking satellite orbiting Earth, visible to the naked eye in the night sky. The Humanity Star is designed to encourage everyone to look up and consider our place in the universe.

Created by Rocket Lab founder and CEO Peter Beck, the Humanity Star is a geodesic sphere made from carbon fibre with 65 highly reflective panels. It spins rapidly, reflecting the suns rays back to Earth, creating a flashing light that can be seen against a backdrop of stars.

The Humanity Star will orbit the Earth for approximately nine months before its orbit starts to decay and it will reenter the atmosphere.

The first Humanity Star was launched on the maiden flight of the rocket with the It's a Test mission, but failed to reach orbit.

The second Humanity Star was launched on the second flight of the rocket with the Still Testing mission and was successfully orbited. It reentered from orbit on 21 March 2018.