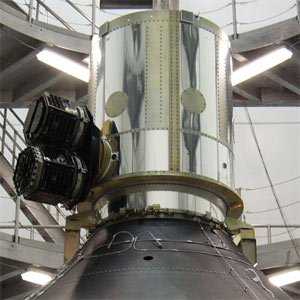 The HLVOLSDP (Heavy Lift Vehicle Operational Launch Service Demonstration Payload) or DemoSat is only a 5993 kg instrumented mass to record multiple ride characteristics of the Delta-4H to be plugged into future military satellite and OSP designs. The vehicle flew a typical geosynchronous orbit-insertion mission profile and was to deliver the payload into an orbit above the geostationary orbit.

It was based on a demonstration payload constructed for the maiden Delta-4 flight, which was not used, as a real payload was available. DemoSat is a cylindrical outer aluminium structure 1.95 m high and 1.38 m diameter. The inner ballast consists of sixty brass rods, stiffeners, fasteners and fittings.

Two criteria had to be met in the construction of this demonstration payload:

As the structure is very robust, a late addition of the 3CS (Nanosat-2) payload to the DemoSat was possible. The dispenser was side-mounted on DemoSat.

The DemoSat reached a lower than planned orbit as the Delta-4H under-performed with shorter than planned CBC burn times, leading to a fuel shortage of the second stage during the last burn.