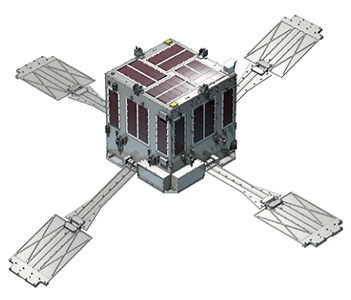 Hibari is a Japanese technology evaluation mission by the Tokyo Institute of Technology to test a new attitude control method to achieve high accuracy pointing for its small telescope. The key technology to be tested is called Variable Shape Attitude Control (VSAC), and it is based on reaction torque by rotating its four solar array paddles.

This project aims develop high pointing stability and agile maneuvering of a small satellite by using reaction torque of the satellite's structure. This technology is hoped to substitute the use of reaction wheels and control moment gyroscopes (CMG), which arguably have difficulty achieving both agility and stability simultaneously. This capability would be useful for a very fast response to observe in the direction of gravitational waves or other transient astrophysical phenomena.

The spacecraft is a 50 kg-class microsatellite configured in a 50 cm cube, carries a small ultraviolet telescope to verify the pointing stability (< 10 arcsec2) and accuracy of the VSAC system. The orientation high accuracy would be achieved by rotating the arms of its four solar arrays in an orthogonal axis. Solar cells would be mounted on both sides of each solar array paddle.