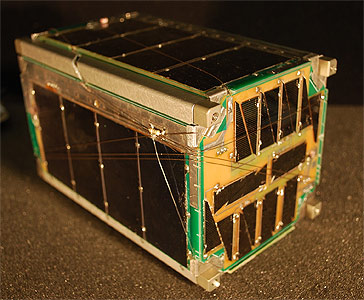 HFsat (High Frequency Satellite) is a project to demonstrate the viability of HF satellite communications as a backup communications system using existing ubiquitous HF radios that are usually a part of the communications suite on all small mobile platforms such has ham radio mobiles and portable operations frequently used by Amateurs in support of disaster and emergency response communications.

HFsat is based on the 1.5U CubeSat form factor. The HFsat will be gravity gradient stabilized by its long full size 10 meter band halfwave HF dipole antenna with tip masses. HFsat will continue the long tradition of small amateur satellites designed by Aerospace students at the US Naval Academy. The uplink is at 21.4 MHz and downlink at 29.42 MHz.

It continues the PCsat, PSAT-1 and PSAT-2 missions but extends it to mobile and portable operators that have ubiquitous HF radios as well. The HF transponder can relay any waveform already used on HF (that is not corrupted by Doppler) making it a seamless transition to use the satellite when HF propagation is not available.

USNA is looking for a ride to space that will give it a life span of several years. The Airforce Space Test program has declared that there will be no more Naval Academy student Amateur Satellites submitted for possible DoD launch via the Space Test Program, so the HFsat was removed from the annual Space Experiments Review Board for 2017 and the fate of the satellite remains in limbo.