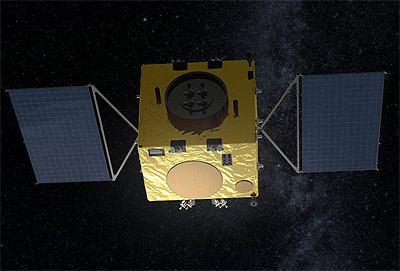 ESA's Hera probe is a mission to rendezvous with the binary asteroid system (65803) Didymos to evaluate the earlier kinetic impact of NASA's DART probe on the secondary body Dimorphos.

After launch in 2024, Hera will travel to the (65803) Didymos binary asteroid system of near-Earth asteroids. The 780 m-diameter mountain-sized main body is orbited by the 160 m moon Dimorphos, informally called Didymoon, about the same size as the Great Pyramid of Giza.

This smaller body, Dimorphos, is Heras focus: the spacecraft would perform high-resolution visual, laser and radio science mapping of the moon, which will be the smallest asteroid visited so far, to build detailed maps of its surface and interior structure.

Hera will carry also two small CubeSats: Juventas will perform the first radar probe of an asteroid, while Milani (ex APEX) will perform a multispectral mineral survey of its makeup. These two nanosatellites will be deployed a few hundred meters above the surface and will fly closer to their target asteroid and take more risks than the main Hera spacecraft, and will both end up landing on the surface once their main mission goals are achieved. The hope is that both CubeSats survive their descent to return some observations, including close-up views of the surface material.

Hera is planned to launch in October 2024 and rendezvous with asteroid Didymos in 2026. It was baselined for an Ariane-62 Astris launch, but in October 2022 a SpaceX Falcon-9 v1.2 (Block 5) was selected.