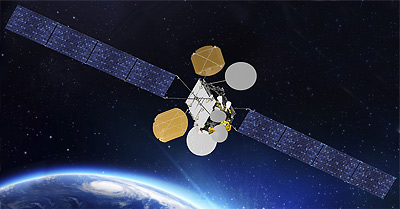 Thales Alenia Space announced in June 2014 the contract to built the Europasat / Hellas-Sat 3 satellite based on the Spacebus-4000C4 bus. It will deliver a multi-beam mission in S-band and Ka-band for Inmarsat as well as a powerful Ku/Ka-Band mission of 44 Ku and 1 Ka transponders for Hellas-Sat. The satellite will weigh about 5.9 tons at launch and will offer payload power of about 12.3 kW. Inmarsat-S–Europasat / Hellas-Sat 3 will be positioned at 39° East.

The MSS payload is designed to deliver an S-band service across all 28 member states of the European Union; the FSS/BSS coverage zones are Europe, Middle East and Southern Africa. The Inmarsat-S–Europasat payload will offer enhanced mobile services across Europe through a hybrid network, which combines S-Band satellite services with a Complementary Ground Component (CGC) infrastructure. Inmarsat-S–Europasat will serve the aviation passenger connectivity services, as well as the safety services for Public Protection & Disaster Relief (PPDR) all over Europe. The Hellas-Sat 3 payload will deliver DTH and Telecom services in its designated coverage areas, maintaining and expanding Hellas-Sat business reach with additional capacities.

As program prime contractor, Thales Alenia Space is in charge of the design, production, testing and On Ground Delivery (OGD) of the satellite. It will also take charge of the launch campaign, and will support the customers for the Launch and Early Operations Phase (LEOP) and In-Orbit Tests (IOT).

The satellite originally had a launch contract on a Falcon-Heavy (Block 5). Inmarsat also has signed an option on a Proton-M Briz-M (Ph.4) launch vehicle to safeguard agains further delays of the Falcon-Heavy. In late 2016, it was moved to an Ariane-5ECA launch in mid 2017.