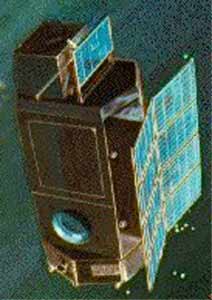 The HEAO 3 (High-Energy Astronomy Observatory 3) mission performed a sky survey of gamma rays and cosmic rays in a manner similar to HEAO 1. It had a higher orbital inclination than the previous missions in this series, since the payload consisted primarily of cosmic-ray instrumentation; greater cosmic-ray flux occurs near the earth's magnetic poles. The scientific objectives of the mission were

The normal operating mode was a continuous celestial scan about the Z axis (which nominally pointed to the sun).

HEAO 3 featured a Gamma ray spectrometer with 4 cryogenically cooled germanium detectors, each with an energy range of 50 keV.to 10 MeV.