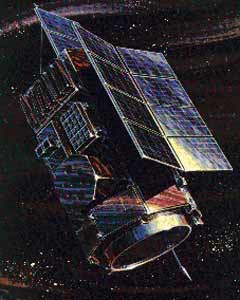 HEAO 1 (High-Energy Astronomy Observatory 1) was the first in a series of three satellite observatories designed to continue the X-ray and gamma-ray studies initiated by ANS, OAO 3, UK 5, the OSO series, the SAS series, and the gamma-ray burst discoveries of the Vela satellites.

This mission was specifically designed to map and survey the celestial sphere for X-ray and gamma-ray sources in the energy range of 150 eV to 10 MeV, to establish the size and precise location of X-ray sources to determine the contribution of discrete sources to the X-ray background, and to measure time variations of X-ray sources.

This observatory consisted of a common spacecraft equipment module (SEM), which carried most of the spacecraft operational equipment, and a unique experiment module (EM), which carried some elements of the electrical distribution system in addition to the four experiments: Large Area X-ray Survey, Cosmic X-ray Background Experiment, Scanning Modulation Collimator, and Hard X-ray and Low Energy Gamma-Ray Experiment.

Continuous celestial scans were made perpendicular to the satellite-sun vector during the initial phase of the mission. Scan rate was 0.03 rpm. The entire celestial sphere would be scanned in 6 months. When passing over the South Atlantic Anomaly (SAA) of the inner Van Allen Belt, high-voltage supplies were turned off or reduced to prevent damage caused by saturation effects.