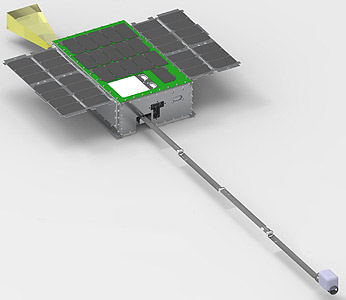 GTOSat (Geostationary Transfer Orbit Satellite) is a 6U CubeSat mission developed by NASA's Goddard Space Flight Center to serve as a pathfinder for new radiation-tolerant technologies that could enable the deployment a constellation of small satellites beyond low-Earth orbit to gather simultaneous, multi-point measurements of Earth's ever-changing magnetosphere.

GTOSat will be the first CubeSat to operate in geostationary transfer orbit and the first to use the latest, more robust version of the NASA-developed Dellingr spacecraft bus called the Dellingr-X.

GTOSat is targeting severe radiation environment of GTO. It features a 7 mm thick vault for electronics. As a scientific mission, it is detecting very high energy particles with the goal of advancing our quantitative understanding of acceleration and loss of relativistic electrons in the Earths outer radiation belt. It will simultaneously measure electron spectra and pitch angles of both the seed and the energized electron populations, using a compact, high-heritage Relativistic Electron Magnetic Spectrometer, a miniaturized version of the RBSP's (Van Allen Probe) MagEIS instrument. Also it carries a miniaturized version of magnetometers on MAVEN, Juno, PSP and Van Allen Probes.

It was selected in 2019 by NASA's CubeSat Launch Initiative (CSLI) to be launched as part of the ELaNa program. Launch is planned for early 2021, the USD 4.5-million GTOSat will gather measurements from a highly elliptical Earth orbit that is a standard transfer orbit for communications satellites operating in geostationary orbit about 38000 km from Earth. From that location, GTOSat will use its two onboard instruments to measure high-energy particles that likely originate from solar wind and cosmic rays.