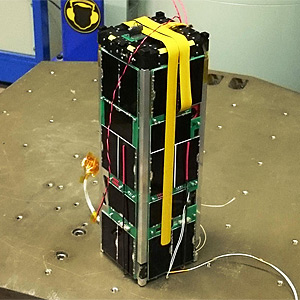 GreenCube is an Italian technology demonstration 3U CubeSat by ENEA and the University of Naples Federico II aimed at hosting an autonomous cultivation laboratory, a BLSS aimed at cultivating brassicacae microgreens in space.

The spacecraft merges a mature bus, composed of part of the same components that were already assembled on 1KUNS-PF and LEDSAT, with a unique payload: a 2-Units large pressurized vessel hosting all the needed equipment for allowing the growth of microgreens.

The main mission is devoted to an experiment in plants growing in a microgravity environment, with a miniaturized life-support system including the environment sensors (CO2, O2, temperature, pressure) and a micro-camera installed internally to the system to assess the plant growing status. The payload is able to monitor and control the chamber air composition (with particular regards to the CO2, oxygen and VOC components), the chamber humidity, lighting (through a LED matrix optimized for inducing less stress in the plant growth), air recirculation (through an air fan used to mitigate the air composition inside the chamber). Cameras and other sensors are placed in the pressurized chamber inner volume to monitor the plant growth and health status

The satellite will demonstrate the effectiveness and well-functioning of the briefly described autonomous, miniaturized BLSS for plants cultivation on-board small satellite. The spacecraft mission concept won a launch opportunity offered by ESA on-board the Maiden Vega-C launch, that will aim at a 6000 km, 70 degrees inclination orbit. The survival of the plants in the extreme micro-gravity and radiative environment will be assessed during the mission.

The main radioamateur aim of the mission is testing a digipeater system in this above- LEO spacecraft, capable to reach a very large portion of the Earth, both in real time and in a store and forward configuration.

The radioamateur/educational aim of the mission is testing a communication system capable to download unique pictures of the Earth, taken by an educational (low definition) camera placed externally form the satellite. In addition, the telemetry will be downlinked periodically with public formats and will provide a clear picture of the behavior of the hardware in the space environment.

Finally, information on the survival of electronics in the inner Van Allen belt, will be gained for radio amateur future missions. The radioamateur/educational return of the mission for the students involved will focus on the experimental activity for the development and management of a digital radio communication system suitable for a distant orbit in a very adverse radiation environment, within the inner VanAllen belt.