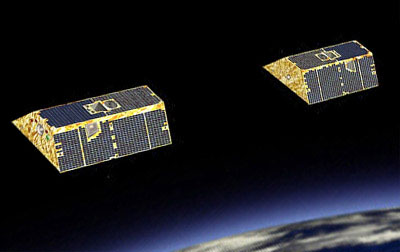 NASA's and GFZ's GRACE-FO (Gravity Recovery And Climate Experiment - Follow On) mission is the successor to the GRACE mission.

For a minimum of five years from August 2017, the GRACE-FO mission will continue the extremely accurate measurement data collection of the first twin GRACE satellites, which have been in orbit since 17 March 2002.

Each of the GRACE-FO satellites measures approximately 3 × 2 × 0.8 m and weighs around 580 kg. Like their predecessors, they will be placed in a polar orbit at an altitude of some 500 km and follow each other 220 km apart. As they fly, the two satellites constantly and extremely precisely determine the distance between them, which varies under the influence of the Earths gravity; this fluctuating distance provides the data for continued measurement of our planets gravity field.

The measurements taken by the GRACE-FO satellites will be exceptionally accurate because their positions will be minutely ascertained using on-board Global Positioning System (GPS) receivers, while a satellite-to-satellite microwave link will enable the exact distance between them to be calculated to within a few thousandths of a millimetre. In contrast to the original GRACE mission, the distance between the new satellites will also be measured using lasers  a technological experiment in preparation for future generations of gravity-research satellites.

Throughout the five-year mission, these measurements will be used to generate an updated model of the Earths gravitational field every 30 days. In addition, every day each satellite will create up to 200 profiles of temperature distribution and water vapour content in the atmosphere and ionosphere.

Originally a launch on a Dnepr rocket from Baikonur in 2017 was planned, but with Dnepr becoming unavailable, the launch was switched to a Falcon-9 v1.2(ex) subcontracted from Iridium, flying together with five Iridium-NEXT satellites in 2018.