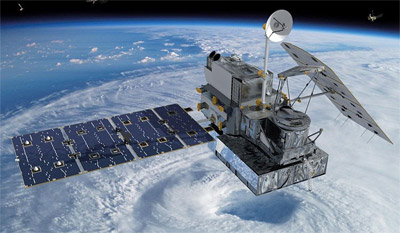 The Global Precipitation Measurement (GPM) is a follow-on mission to the Tropical Rainfall Measuring Mission (TRMM). GPM is one of the earth observation satellite programs, mainly initiated by the Japan Aerospace Exploration Agency (JAXA), the National Institute of Infomation and Communications Technology (NICT) and the National Aeronautics and Space Administration (NASA).

The sub-satellite constellation was launched by NASA, European Space Agency (ESA) and other space organizations in the world. The number of satellites will be around eight. It is possible to get a global rainfall distribution in every 3 hours when the microwave scanning radiometers aboard these 8 polar orbit satellites collect and process the data. GPM plans real-time transmission of the global rainfall distribution data. This real-time data can be utilized not only for scientific research, but also for weather forecast, flood prediction, water resource management.

The major sensors on the GPM primary satellite are the dual-frequency precipitation radar (DPR) and the microwave radiometer (GMI). The DPR consists of two radars, a TRMM/PR-type precipitation radar with a frequency of 13.6 GHz, and a 35.5 GHz precipitation radar that is added to improve the sensitivity and accuracy of measurement. The GMI will be an improved model of the TRMM Microwave Imager (TMI). The roles of the GPM primary satellite are to collect as much microphysical information as possible for accurate rain estimation by performing synchronous observation with the GMI and the DPR, and to provide calibration standards for the other microwave radiometers on the constellation satellites.

The Core Spacecraft was developed in-house at NASA GSFC with the avionics procured through Goddard's Rapid Spacecraft Development Office (RSDO). In March 2005, NASA chose Ball Aerospace & Technology Corporation to provide the GMI instrument. The DPR instrument was being developed by Japan Aerospace Exploration Agency (JAXA) and the National Institute of Information and Communications Technology (NICT) for a flight on the GPM Core Observatory. NEC Toshiba Space Systems, Ltd. (NTSpace) designed and tested the radars under the direction of JAXA and NICT. JAXA provides the H-2A launch vehicle.

The GPM constellation consists of consists of nine other spacecraft in orbit with four more awaiting launch:

The GPM-Core satellite will serve to provide a reference point with which the rest of the constellations data can be calibrated.