GP B (Gravity Probe B) 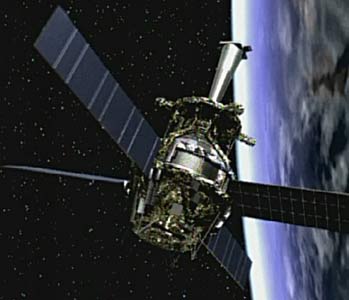 GP B (Gravity Probe B) is an experiment being developed by NASA and Stanford University to test two unverified predictions of Albert Einstein's general theory of relativity. The experiment will check, very precisely, tiny changes in the direction of spin of four gyroscopes contained in a satellite in a 650 km polar orbit. The gyroscopes will measure how space and time are warped by the presence of the Earth, and, more profoundly, how the Earth's rotation drags space-time around with it. These effects, though small for the Earth, have far-reaching implications for the nature of matter and the structure of the Universe.

The story of the funding of Gravity Probe B is a rather interesting one: In March 1964 NASA began funding the feasibility of the mission and preliminary technology development. Low level funding continued through 1985. In Fiscal Year 1985, NASA initiated a program called STORE (Shuttle Test of the Relativity Experiment) to perform part of the experiment. NASA planned to build the final flight instrument, do an experimental rehearsal with the instrument captive on Shuttle after which it would be returned to earth for refurbishing and joining with its own space vehicle. The full spacecraft then would be re-flown on Shuttle and launched from Shuttle as a free flyer in polar orbit. The plans for STORE were modified in consequence of the Challenger tragedy in 1986, but STORE was continued as an instrument development program without a shuttle test. In 1993, following two independent studies of the Gravity Probe B spacecraft, NASA approved selection of one contractor (Lockheed Martin Missiles and Space) and the start of the full GP-B flight program.

The spacecraft is spin stabilized (0.1 to 1 rpm). Attitude control thrusters use helium boiled off from the experiment's dewar. Experiment gyro used for attitude reference.

A block of fused quartz 21 inches long holds four gyroscopes and a proof mass, all bonded to a quartz telescope. The package is inserted into a 1500 L helium dewar to keep at 1.8 Kelvin. The gyroscopes are constructed from ultrasmooth quartz balls coated with niobium which becomes a superconductor as liquid helium temperatures, allowing the gyroscopes to be suspended electrically. Very sensitive magnetometers detect any changes in the gyroscope's spin axis. The gyros spin at 10,000 revolutions a minute.

Due to many delays and cost over runs, the GP B mission was under review for a time, but was finally launched on 20. April 2004.