GP A (Gravity Probe A) 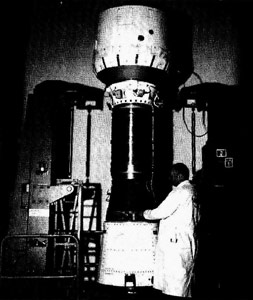 GP-A (Gravity Probe A) was the launch of a precise clock on a suborbital rocket to explore the structure of space and time. The experiment was performed by launching a highly accurate MASER atomic clock, and recording how it measured time as it rose to weaker levels of gravity, then fell back to the Earth.

MASER stands for Microwave Amplification by Stimulation Emission of Radiation, and it is one type of highly accurate clock used to measure infinitesimal changes in the passage of time. The purpose of the experiment was to determine whether time progressed at a different rate in conditions where gravity is weaker. This difference in the rate of passage of time, predicted by Einstein's Theory of Relativity, is called the "redshift."

The primary objective of the mission was to test a portion of Einstein's gravitation and relativity theories called the "Principle of Equivalence," to an accuracy of 200 parts per million.

A secondary objective was to demonstrate the operation of a MASER clock in space. The Gravity Probe A payload was launched in 1976 from the NASA-Wallops Flight Center in Virginia. GP-A was only in space for one hour and 55 minutes, in an elliptical flight trajectory over the Atlantic. However, it attained an altitude of 6,200 miles above the Earth before crashing into the Atlantic Ocean.

During this short trip, GP-A transmitted accurate measurements of slight changes in the clock's rate in lower gravity, and provided the best test of this portion of Einstein's theories that has been performed to date.