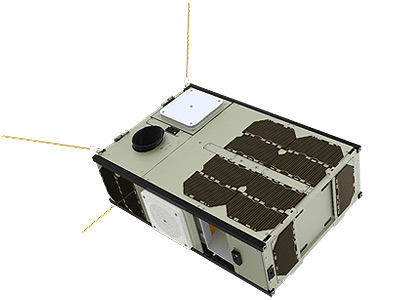 GOMSpace's GOMX-4A and 4B are 6U CubeSat for demonstrating key technologies to handle large satellite formations.

GOMSpace builds GOMX-4A for the Danish Ministry of Defence and GOMX-4B for ESA under separate contracts.

GOMX-4A is sponsored by DALO who by this mission will have their first satellite intended to contribute to surveilance of the Artic. The GOMX-4A demonstration is part of an analysis seeking to identify best-practice and future efforts reinforcing the Danish Defenses surveillance of the Artic within the Kingdom. The satellite has been named Ulloriaq after the word star in the Greenlandic language.

The two CubeSats will stay linked through a new version of the software-defined radio system demonstrated on GOMX-3, while their relative positions along their shared orbit is controlled up to a maximum 4500 km. The same radio system will also be used for rapid payload data downloads to Earth. Nanospace in Sweden are contributing the highly miniaturised cold-gas thrusters for controlling the orbit, allowing future CubeSat-based constellations to be deployed quickly after launch.

Addition technology payloads include a compact hyperspectral imager called HyperScout, developed by Cosine Research in the Netherlands; a miniaturised startracker from Innovative Solutions In Space, also in the Netherlands; an inhouse ESA experiment to test components for radiation hardness; and an ADS-B antenna for aircraft tracking, developed from the GomSpace system tested on GOMX-3.