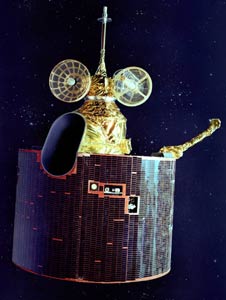 Provision of timely global weather information, including advance warning of developing storms, is the primary function of the U.S. GOES meteorological program. To provide more complete data, a trio of Geostationary Operational Environmental Satellites known as GOES D, E, F was launched and operated by the National Oceanic and Atmospheric Administration (NOAA) as part of the Global Weather Watch. Two new satellites of a similar design, GOES G and H, were also built by Hughes Space and Communications Company at the Integrated Satellite Factory in El Segundo, California.

NOAA's earlier GOES spacecraft and their predecessors, the Synchronous Meteorological Satellites, employed a visible and infrared spin scan radiometer (VISSR) to produce two-dimensional imagery from the visible and infrared spectral regions. The VISSR senses radiation from Earth and its atmosphere. From the satellite's orbital altitude approximately 22,300 miles (36,000 km) above the equator, the VISSR transmits black and white, television-like images of one-third of Earth every 20 minutes.

GOES H, like other Hughes-built GOES, was equipped with an improved VISSR incorporating a visible and infrared atmospheric sounder (VAS). The VAS adds a vital third dimension to the imagery. Aboard the GOES, the VAS measured vertical temperature versus altitude cross sections of the atmosphere. From these cross sections the altitudes and temperatures of clouds were determined and a three-dimensional picture of their distribution was drawn for more accurate weather prediction.

In September 1980, GOES D was placed in synchronous orbit by a Delta-3914 booster. It made the first vertical temperature measurements from synchronous orbit. The VAS recorded visible imagery with a resolution of 0.6 mile (0.9 km) and infrared imagery with a resolution of 4.3 miles (6.9 km). Both VAS and the spin stabilized GOES satellites were built for the National Aeronautics and Space Administration [NASA] by Hughes. The satellites were procured and launched on a cost reimbursable basis for NOAA by NASA. GOES E was launched in May 1981, and GOES F was launched in April 1983. GOES D and E have experienced failures in VAS subsystems and have been deactivated. GOES G was launched in May 1986, but was destroyed when its Delta booster rocket went out of control. GOES H was successfully launched on a Delta booster in February 1987, and remained operational until July 1995.

GOES H had the added capability of transponding signals at 406 MHz from emergency locator transmitters on ships and planes in distress. GOES H was able to participate in the international search and rescue satellite program, COSPAS/SARSAT.

Using GOES imagery, meteorologists were able to measure the frame-to-frame movement of selected clouds at different altitudes and to obtain their wind direction and speed in order to better understand atmospheric circulation patterns.

A data collection system on GOES received and relayed environmental data sensed by widely dispersed surface platforms such as river and rain gauges, seismometers, tide gauges, buoys, ships and automatic weather stations. Platforms transmit sensor data to the satellite at regular intervals, upon interrogation by the satellite, or in an emergency alarm mode whenever a sensor receives information exceeding a preset level.

The GOES spacecraft transmitted meteorological imagery and data to the Wallops Island, Virginia, ground station, which relayed the data to the World Weather Building near Suitland, Maryland. The information was then processed and distributed to users throughout the United States. The GOES program was managed by the Office of Applications, NASA Headquarters, Washington, D.C. Project management of the GOES system was assigned to NASA's Goddard Space Flight Center, Greenbelt, Md.