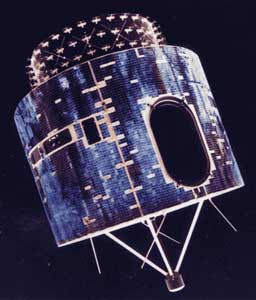 The cylindrically shaped spacecraft measured 190.5 cm in diameter and 230 cm in length, exclusive of a magnetometer that extended an additional 83 cm beyond the cylinder shell. The primary structural members were a honeycombed equipment shelf and a thrust tube. The VISSR telescope was mounted on the equipment shelf and viewed the earth through a special aperture in the side of the spacecraft. A support structure extended radially out from the thrust tube and was affixed to the solar panels, which formed the outer walls of the spacecraft and provided the primary source of electrical power. Located in the annulus-shaped space between the thrust tube and the solar panels were station-keeping and dynamics control equipment, batteries, and most of the SEM equipment. Proper spacecraft attitude and spin rate (approximately 100 rpm) were maintained by two separate sets of jet thrusters mounted around the spacecraft equator and activated by ground command. The spacecraft used both UHF and S-band frequencies in its telemetry and command subsystem. A low-power VHF transponder provided telemetry and command during launch and then served as a backup for the primary subsystem once the spacecraft had attained synchronous orbit.

Beginning with the third spacecraft the series was renamed GOES.

GOES 3 was deactivated in June 2016 after 38 years. Long after the imaging instrument failed, the satellite had been used for 21 years by the U.S. National Science Foundation (NSF) for 21 years to link NSF's Amundsen-Scott South Pole Station with the outside world.