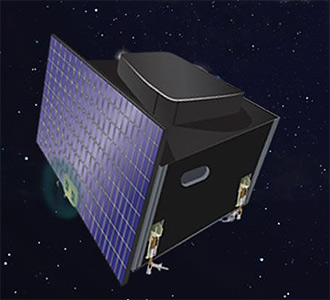 GLIDE (Global Lyman-alpha Imagers of the Dynamic Exosphere) is a mission by NASA led by Electrical and Computer Engineering at the University of Illinois to make unprecedented measurements of the far ultraviolet light emitted by hydrogen atoms in the Earths outermost atmospheric layer, known as the exosphere, which extends almost halfway to the moon.

This bright emission serves as a tracer of exospheric density and spatial structure, knowledge of which is needed to advance understanding of upper atmospheric physics, particularly regarding Earths recovery from solar-driven disturbances known as space weather.

GLIDE will study variability in Earths exosphere by tracking far ultraviolet light emitted from hydrogen. The exosphere is the outer region of Earths atmosphere that touches space  a region where atoms can escape Earth. Observing the global structure of the exosphere requires a telescope that is outside of the outer reaches of the atmosphere, which extend almost to the Moon. The IMAP launch trajectory to the inner Lagrangian point, the point of the Earth-Sun system that provides an uninterrupted view of the Sun, will provide just such a perspective for the GLIDE mission and is ideally suited for the first continuous observations of the exosphere and its variations in response to solar storm disruptions.

GLIDE will fill a measurement gap, as only a handful of comparable ultraviolet light images have previously been made from outside the exosphere. The mission will gather observations at a high rate, with a view of the entire exosphere, ensuring a global and comprehensive set of data. Understanding the ways in which Earths exosphere changes in response to influences of the Sun above or the atmosphere below, will provide us with better ways to forecast and, ultimately, mitigate the ways in which space weather can interfere with radio communications in space.