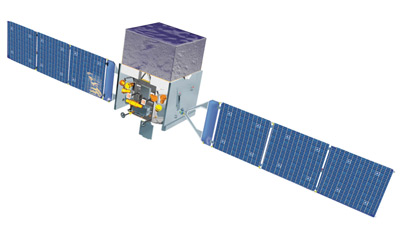 GLAST (Gamma-ray Large Area Space Telescope), renamed FGST (Fermi Gamma-ray Space Telescope) after launch, is a gamma ray observatory, to be launched 2008, for making observations of celestial gamma-ray sources in the energy band extending from 10 MeV to more than 100 GeV. It is a follow on to the CGRO's EGRET experiment. The prime instrument is LAT (Large Area Telescope), which consists of 4 components:

The LAT has a field of view about twice as wide (more than 2.5 steradians), and sensitivity about 50 times that of EGRET at 100 MeV and even more at higher energies.

The secondary instrument is the GLAST Burst Monitor (GBM), which will have a field of view several times larger than the LAT and will provide spectral coverage of gamma-ray bursts that extends from the lower limit of the LAT down to 10 keV.