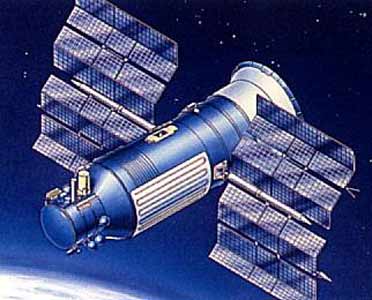 The soviet / french Gamma gamma / x-ray astronomical telescope spacecraft was derived from the Soyuz crewed spacecraft and had an unusually long gestation. The basic design was first conceived in 1965 as part of a 'Cloud Space Station' - a primary space station from which a number of man-tended, free-flying spacecraft would operated. This evolved by the early 1970's into the MKBS/MOK space station complex. Various spacecraft with specialised laboratories or instrument sets would fly autonomously away from the huge N1-launched main station. Gamma was originally to be a free-flyer of this complex. The Soyuz propulsion system was used, but the descent and orbital modules were replaced by a large pressurised cylinder containing the scientific instruments.

Work on the instrument payload for Gamma began in 1972, and French participation began in 1974. However that same year the N1 launch vehicle, and the MKBS space station, were cancelled.

The Soviet space program was completely reformulated in a resolution of February 1976, which included authorisation to develop the free flyer in conjunction with the DOS-7/DOS-8 space station (which would eventually evolve into Mir). The draft project for Gamma was completed in 1978, and production was authorised together with Mir on 16 February 1979. At this point Gamma included a passive docking port so that the spacecraft could be serviced by Soyuz crewed spacecraft. It was planned that at six and twelve months into its one year mission Gamma would be visited by a two-crew Soyuz, who would replace film cassettes and repair or replace instruments. This approach was dropped in 1982 when it became apparent that the spacecraft was overweight and that all planned Soyuz would be needed for support of the Mir station itself. All film systems were removed and replaced with purely electronic data return methods.

By that time Gamma was scheduled originally for launch in 1984, but further severe technical delays resulted in a 1990 launch, 35 years after it was first conceived. In the end the satellite's research in the field of high-energy astrophysics, conducted jointly with France and Poland, did not produce many noteworthy results.