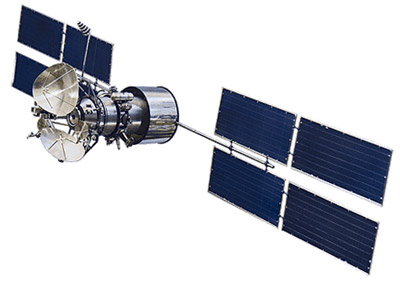 The Gals television broadcasting satellite, originally expected to be launched by December, 1990, was designed to support a variety of direct broadcast customers, including professional broadcasting firms (having antenna 2.5 m in diameter), community associations (receiving antenna 1.5 m), and individuals (receiving antenna 0.6-0.9 m). The year 1994 marked the long awaited debut of the first of the next-generation Russian geosynchronous communications satellites.

The spacecraft, designed and built by the Applied Mechanics NPO, utilized a new, modernized MSS-2500 class bus with greater electrical power, higher precision station-keeping capabilities (including north-south station-keeping), and longer life. The first of these spacecraft to appear was Gals 1 on 20 January 1994, followed by Express 1 on 13 October. Both employed the MSS-2500-GSO-01 spacecraft bus. Two other models (MSS-2500-GSO-02 and MSS-2500-GSO) were still under development. Gals 1 further tested the Russian SPT-100 ion thruster created by the Fakel Bureau. This evaluation program was conducted in conjunction with France's SEP firm and U.S.'s Loral Space Systems Company. Two solar arrays with a total power of 2.4 kW supported three Ku-band transponders (one 40 W and two 80 W). The spacecraft bus measured 4.1 m by 6.6 m with a 21-m span across the solar arrays. The design lifetime was 5-7 years.

Gals 1 also signaled the first civilian control of a major applications spacecraft. The new Main Control Center at Krasnoyarsk in Siberia of the Applied Mechanics NPO), rather than the military satellite control facility at Golitsino-2, was in charge of Gals' day-to-day operations.

Like most Russian geosynchronous spacecraft, Gals 1 was inserted into the geosynchronous ring near 90 degrees E. A western drift was assigned to permit the vehicle to reach 44 degrees E by early February, 1994. After checkout during which problems were detected with one of the three transponders, Gals 1 was unexpectedly transferred to 71 degrees E in May-June to service, not the Russian Federation, but the PRC and Taiwan. Gals 1 remained at 71 degrees E for the remainder of 1994.

Three modifications of Gals were envisioned. Gals-R would add a fourth transponder and permit zonal (broad area) television broadcasting. The Gals-R6 and Gals-R12 variants would carry 6 and 12 transponders, respectively. The first launch of a Gals-R vehicle was tentatively set for 1996. Two Gals-R class spacecraft were reportedly been ordered by a Chinese company for launches beginning in 1998. None of these Gals variations have appeared.