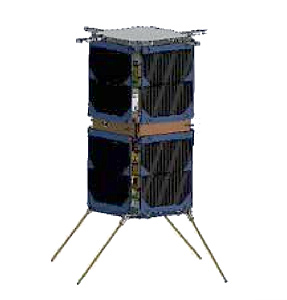 Galassia is a 2U Cubesat developed by undergraduate students at the National University of Singapore (NUS).

Galassia is the first NUS Cubesat. There are many educational and scientific objectives in this project. The educational objectives are for students to gain hands-on experience with real hardware and software integrations, to design and verify Cubesat system mechanisms, to test some in-house developed devices, and to work and integrate the two scientific experiments into the Cubesat.

The first primary payload measures the Total Electron Count (TEC) in the Ionosphere above Singapore. TEC is a measure used to characterize the conductivity of the ionosphere, which consists of ionized layers in the upper atmosphere. The free electrons in the ionosphere affect the propagation of radio waves. TEC is measured by Galassia using the three frequencies method.

The second primary payload is the Small Photon-Entangling Quantum System (SPEQS) payload, which is developed by the Center for Quantum Technologies (CQT) in NUS. A compact and efficient system for generating and detecting photon pairs is conducted. The SPEQS experiment utilizes a process called Spontaneous Parametric Down Conversion (SPDC) to generate entangled photon pairs. The generation and detection of photon pairs are performed within the package to check the quality of the entanglement. This package achieves high entanglement fidelity and enables a quantum light source to be deployed on mobile field communication systems where resources are scarce. The SPEQS payload conducts the science experiment for a maximum duration of 30 minutes.

Galassia is scheduled to launch as a piggy-back payload in the 4th quarter of 2015 on an Indian PSLV-CA vehicle into a near equatorial orbit with an altitude of 550 km and an inclination of 15°.