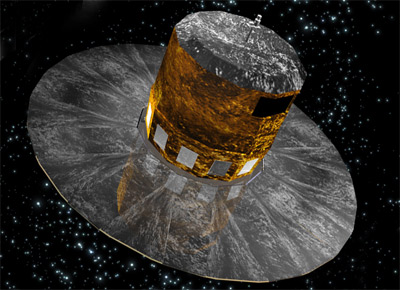 Gaia (formerly GAIA for Global Astrometric Interferometer for Astrophysics, due to technology change, the acronym is no longer true) will survey more than one billion stars, including many of the closest stars to the Sun. Its goal is to make the largest, most precise map of where we live in space by surveying an unprecedented one per cent of our Galaxy's population of 100 billion stars. It will be a follow-up to the Hipparcos mission.

As its sensitive telescopes go about the job of pinpointing the stars, they are bound to make many other discoveries as well. Planets around other stars, asteroids in our Solar System, icy bodies in the outer Solar System, failed stars and far-distant exploding stars. The list of Gaia's potential discoveries makes the mission unique in scope and scientific return. Huge data bases of information will be compiled from the Gaia data, allowing astronomers to trawl the archives looking for similar celestial objects or events and other correlations that might just provide the clue necessary to solve their particular, seemingly intractable, scientific puzzle.

Gaia is a single spacecraft, consisting of three telescopes that will constantly sweep the sky, recording every visible celestial object that crosses its lines of sight. During its anticipated lifetime of five years, Gaia will observe each of its one billion sources about 100 times. Each time, it will detect changes in the object's brightness and position.

The Gaia payload comprises two `Astro' (astrometric) telescopes with a common focal plane, and a `Spectro' telescope comprising a radial velocity spectrograph and a medium-band photometer. Each of these `Astro' instruments comprises an all-reective three-mirror telescope with an aperture of 1.4 × 0.5 m² and a size of 0.65° × 0.65°, the two fields being separated by a basic angle of 106°. Each astrometric field comprises an astrometric sky mapper (ASM), the astrometric field proper (AF), and a broad-band photometer (BBP). Each sky mapper system provides an on-board capability for star detection and selection, and for the star position and satellite scan-speed measurement. The main focal plane assembly employs CCD technology, with about 180 CCDs and accompanying video chains, a pixel size 9 micormeter along scan, TDI (time-delayed integration) mode operation, and an integration time of ~1.5 s per CCD. The CCDs are designed and custom made for the Gaia programme, and cover an overall area of about 0.8 × 0.8 m². The precise `basic angle' between two viewing directions can be calibrated from the 360° closure condition on each great-circle scan, while short-term (< 3 hours) variations are passively controlled, and monitored by internal metrology.

Gaia will significantly improve on Hipparcos for a number of different reasons. For example, the collecting area of the primary mirrors means that Gaia will collect more than 30 times the light of its predecessor. More light means more sensitive and accurate measurements. Gaia will be able to measure a star's position and motion 200 times more accurately than Hipparcos. Changes in a star's position and motion are registered as tiny angles.

Highly efficient cameras, known as CCDs will be used to record the images, so wide-angle images of many celestial objects can be obtained at the same time. Devices known as photocathodes were used on Hipparcos, which meant that the satellite could only record information from a single celestial object at a time.

Gaia will be placed in an orbit around the Sun, at a distance of 1.5 million kilometers further out than Earth. This special location, known as L2, will keep pace with the orbit of the Earth. Gaia will map the stars from here. One of the principal advantages of an L2 orbit is that it offers uninterrupted observations, since the Earth, Moon and Sun remain 'behind' it all the time. Because the L2 point moves around the Sun, keeping pace with the Earth, the entire celestial sphere can be observed during the course of one year. The spacecraft must perform small manoeuvres every month, to ensure it stays at L2.