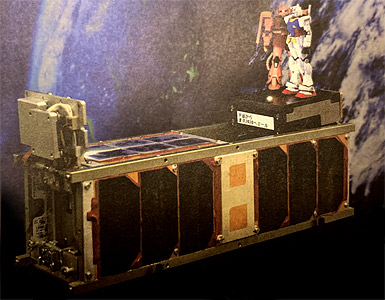 G-Satellite was developed through joint work between Nakasuka Funase Laboratory, Department of Aerospace Engineering, Graduate School of Engineering, the University of Tokyo, and three companies in Fukui Prefecture.

The satellite carries two resin miniture figurines of robots from the popular "Mobile Suite Gundam" anime series. The figurines, made from heat and UV resistant resin, will be folded out from the satellite's interior to the outside. The figurine's pedestal contains a display, which displays supporting messages. A deployable camera will take photos of the figurines and the display, which will be transmitted to earth.

The satellite was launched in March 2020 towards the ISS to be deployed from there. It was deployed on 28 April 2020 from the ISS.

A second satellite, presumed to be identical, has been launched in June 2021 towards the ISS, where it was deployed on 22 June 2021.