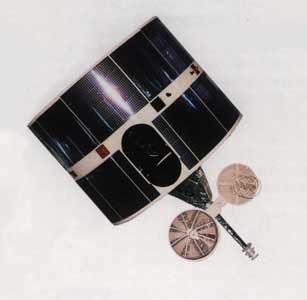 China's geostationary meteorological satellite program FY-2 (Feng Yun 2) began its development in 1980. It is built by the Shanghai Institute of Satellite Engineering.

FY-2 is a spin-stabilized spacecraft with a speed of 100 rotation/min. The satellite bus diameter is 2.1 m, and the total height on-station is about 4.5 m.

In 1994 the first FY 2 spacecraft was to be launched and was fueled and undergoing final check-out on 2 April 1994 before being mated to its CZ-3 launch vehicle when a fire and explosion erupted, destroying the vehicle, killing one worker, and injuring 20 or more others.

The Chinese Meteorological Administration (CMA) launched the replacement FY-2A to 105° East longitude on 10 June 1997 on a CZ-3 booster from Xichang, and the satellite entered operational service late in 1997. On 8 April 1998, FY-2A ceased transmission of images due to a problem with the S-band communication antenna.