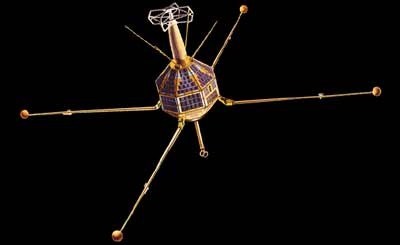 The FR 1 (France 1) spacecraft was a small spacecraft carrying two experiments. One was designed to observe VLF signals from earth-based transmitters, and the other was an electron density probe measuring electron concentration at the satellite.

The satellite structure consisted of two truncated octagonal pyramids, joined at their bases by an octagonal prism measuring 68.6 cm across from corner to corner. This basic structure was covered with solar cells and measured about 71.2 cm high. Extending 48.3 cm downward from the base of this structure was the electron density probe. Extending upward from the top was a structure 71.2 cm high which consisted of the magnetic field antenna and its supporting tube. Extending diagonally upward from the base of this tube were four telemetry antennas. Four 198-cm-long electric field antenna booms extended outward from the base of the prismatic portion of the basic structure. The spacecraft was spin-stabilized, with attitude and spin determination made from observations by a sun sensor and a three-axis fluxgate magnetometer.

This satellite was used to study VLF propagation in the magnetosphere and irregularities in the topside ionosphere. There was no tape recorder onboard, so real-time data were obtained as scheduled, over designated telemetry stations.

The spacecraft operated successfully until August 1968.