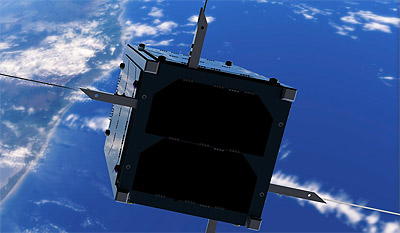 The FloripaSat is an initiative of researchers and students at the Federal University of Santa Catarina to develop complete space missions in the nanosatellites category. FloripaSat is not only a satellite project, but a training/technical/research environment which allows graduate and undergraduate students to work with space applications on real satellite missions. It started in 2013, motivated by a project funded by the Brazilian Space Agency to design a 1U CubeSat, named FloripaSat-I.

It is cube-shaped satellite made of 5 modules. There the core modules for the mission control and the payloads. The core modules developed at UFSC are the On-Board Data Handling (OBDH), the Telemetry, Tracking, and Control (TT&C), the Electric Power System (EPS), and the passive Attitude Control System (ACS). The payload is an amateur radio repeater, which can be used all over the globe in emergency and rescue situations, for instance.

The satellite was launched as a secondary payload on the CZ-4B rocket, which orbited the CZ-4B satellite.