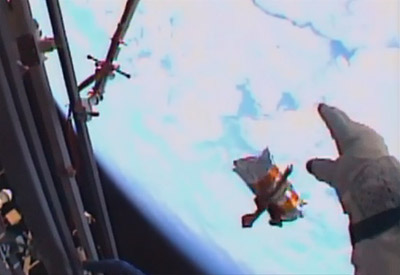 Fleshka ("Flash Drive") is a small, passive memorial package released from the ISS consisting of a bag of towels attached to a commemorative flash drive with videos about World War II and messages to celebrate the 70th anniversary of 'Victory Day'.

It is not quite clear, when Fleshka was launched to the ISS. Likely it was onboard of Progress-MS.

Release of Fleshka was made by hand during a spacewalk (EVA) in the aft-nadir direction from ISS. Deployment occurred on 3 February 2016 at 12:22 UTC.