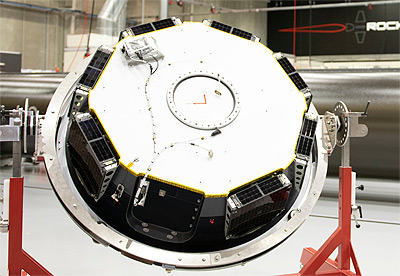 First Light is Rocket lab's demonstration mission for their Photon-LEO bus, a satellite bus based on their Kick Stage Upper stage of the Electron rocket.

In this mission, the Photon-LEO acted both as an upper stage for the Capella 2 satellite and as an independent satellite bus. Launched as a technology demonstration, First Light builds upon the existing capabilities of the Electron launch vehicles Kick Stage with additional subsystems to enable long duration satellite operations. This pathfinding mission is an initial demonstration of the new power management, thermal control and attitude control subsystem capabilities. By testing these systems for an extended period on orbit, Rocket Lab is building up flight heritage for future Photon satellite missions planned to low Earth orbit, the Moon, and Venus.

First Light was deployed to orbit on Rocket Labs 14th Electron mission, I Cant Believe Its Not Optical, which lifted-off from Rocket Lab Launch Complex 1 in New Zealand on August 31, 2020. Approximately 60 minutes after lift-off, Electron deployed a 100 kg microsatellite for Capella Space, an action that would typically signal the successful completion of a standard Rocket Lab mission. However, shortly after deploying the customer payload, Rocket Lab conducted an entirely new operation for the first time: Rocket Lab engineers sent a command to transition the Kick Stage into Photon satellite mode. This action marked the first on-orbit demonstration of Rocket Labs Photon satellite as a two-in-one spacecraft, first using it to complete its conventional launch vehicle function to deploy customer satellites, then transitioning into a satellite to continue a standalone mission.

For the demonstration mission, Photon hosted a low-resolution video camera.