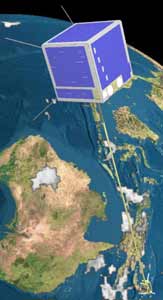 FedSat (Federation Satellite) is an Australian scientific microsatellite mission, a 58 cm cube weighing approximately 50 kg. It was launched in late 2002 from Japan by Japan's National Space Development Agency. Its purposes are:

FedSat is being developed by the Cooperative Research Centre for Satellite Systems, which combines the resources and skills of 12 Australian organisations. Contributions from each of the partner organisations are doubled by the Commonwealth Government, under its Commonwealth Government's Cooperative Research Centre's Program. The total budget of the Centre is approximately $60 million over 7 years, with $20 million of that allocated for the FedSat mission.

Much of FedSat is being developed in Australia by the CRCSS. Three of the 6 main payloads have been fully developed by the CRCSS, and the other three have been supplied by overseas organisations in consultation with the CRCSS. The satellite platform, the structure that houses and maintains the payloads, is being provided by overseas organisations. CRCSS engineers could have developed an Australian platform, but given the time available from project-start to launch, that was not practical. So the CRCSS opted to contract an overseas platform supplier, avoiding the need to reinvent established technologies.