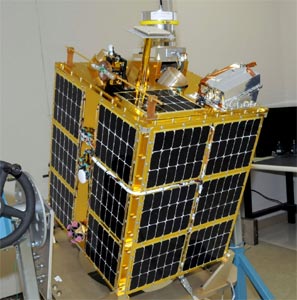 FASTSAT-HSV (Fast Affordable Science and Technology Satellite - Huntsville) is small technological satellite to test out cow-cost technologies for rapidly built small satellite missions. It was built by the Von Braun Center for Space Innovation (VCSI) in Huntsville Alabama in partnership with Dynetics Incorporated and NASA's Marshall Space Flight Center (MSFC) in Huntsville Alabama. Operation of the satellite is conducted from the Mission Operations Center (MOC) at MSFC.

FASTSAT-HSV 01 was launched on 20.11.2010 from Kodiak on a Minotaur-4 HAPS rocket. The Nanosail D was to be ejected on 6 December 2010, but it failed to leave its deployer. Nanosail-D was then spontaneously ejected on 19 January 2011.