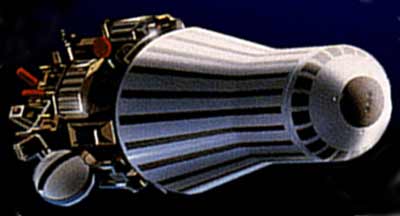 EXPRESS (Experiment Re-entry Space System) was a multi-national (Germany, Japan, Russia, Australia) project for a small, micro gravity and reentry research spacecraft. The spacecraft was procured from Khrunichev for a cost of 30 Mio. DM.

The payload used a Russian-built reentry vehicle, based on an ICBM reentry vehicle, a Russian built service module, derived from the OGCh (FOBS) fractional orbital bombing system, and the launch was carried out by the Japanese ISAS space agency on a M-3S-2 with KM-M kick motor.

It was due to land in the Australian desert after a five day flight, but the thrust vector control on the second stage malfunctioned 103 seconds after launch, and the fourth stage and payload entered a 110 km × 250 km × 33 deg orbit, instead of the intended 270 km × 380 km one. This failure was probably due to second-stage attitude-control oscillations that exhausted attitude-control fuel, probably caused by the heavy payload.

EXPRESS was thought to be lost after launch and was not tracked. But it had indeed reached orbit and reentered the atmosphere during its third orbit. The reentry capsule reentered without guidance in Ghana, where it was discovered 10 months later and retrieved.