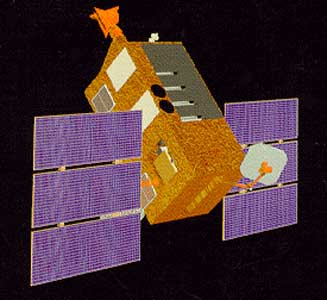 The XTE (X-Ray Timing Explorer), renamed on orbit RXTE (Rossi X-Ray Timing Explorer) mission has the primary objective to study the temporal and broad-band spectral phenomena associated with stellar and galactic systems containing compact objects in the energy range 2--200 keV and in time scales from microseconds to years.

and the All Sky Monitor (ASM), which scans over 70% of the sky each orbit.

All of the XTE observing time will be available to the international scientific community through a peer review of submitted proposals. XTE uses a new spacecraft design that allows flexible operations through rapid pointing, high data rates, and nearly continuous receipt of data at the Science Operations Center at Goddard Space Flight Center via a Multiple Access link to the Tracking and Data Relay Satellite System (TDRSS). XTE is highly maneuverable with a slew rate of greater than 6 degrees per minute. The PCA/HEXTE can be pointed anywhere in the sky to an accuracy of less than 0.1 degree, with an aspect knowledge of around 1 arc-minute. Rotatable solar panels enable anti-sunward pointing to coordinate with ground-based night-time observations. Two pointable high gain antennas maintain nearly continuous communication with the TDRSS. This, together with 1 GB (approximately four orbits) of on-board solid-state data storage, give added flexibility in scheduling observations.

XTE was originally designed as a exchangeable payload module for the EUVE spacecraft, but after the Shuttle service mission was cancelled, XTE was redesigned as a non-serviceable freeflyer.

RXTE was decomissioned on 5 January 2012. The decision to end RXTE's operational mission came after independent researchers in 2010 ranked the project's priority as low compared to other NASA scientific spacecraft. The 3035 kg spacecraft fell back into Earth's atmosphere on 30 April 2018.