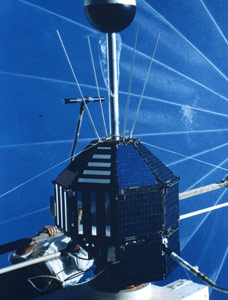 Explorer 45, SSS A (Small Scientific Satellite, S-Cubed) was designed to perform a wide variety of investigations within the magnetosphere with regards to particle fluxes, electric fields, and magnetic fields. Its primary scientific objectives were

To determine the major wave-particle interaction mechanisms, directional measurements of protons, electrons, and alpha particles were made over a wide energy range, and dc and ac electric and magnetic fields were measured. Explorer 45 had the capability for complete inflight control of the data format through the use of an onboard set of stored program instructions. These instructions governed the collection of data and were reprogrammable via ground command. The antenna system consisted of four dipole antennas spaced 90 deg apart on the surface of the spacecraft cover. The satellite contained two transmitters, one for digital (PCM) data at 446 bps, and the other for either the digital data or wideband analog data from 30 Hz to 10 kHz from the ac electric field probes and from one search coil sensor. The satellite power system consisted of a rechargeable battery and an array of solar cells. The spin rate was about 7 rpm, and the spin axis lay in the spacecraft orbital plane which was approximately the same as the earth's equatorial plane. The initial local time of apogee was about 21.8 h and the line of apsides moved around toward the sun at an initial rate of 12 deg per month. The satellite was operationally turned off on 30 September 1974, after approximately 3 years of successful and productive operation.

The onboard instruments were:

Three more satellites of the SSS series were planned, but these were cancelled later.