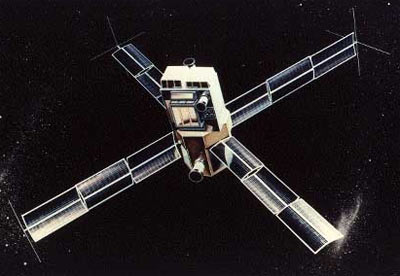 SAS C (Small Astronomy Satellite C, also known as Explorer 53) was the third in the series of small spacecraft whose objectives were to survey the celestial sphere for sources radiating in the X-ray, gamma-ray, UV, and other spectral regions. The primary missions of SAS C were to measure the X-ray emission of discrete extragalactic sources, to monitor the intensity and spectra of galactic X-ray sources from 0.2 to 60 keV. and to monitor the X-ray intensity of Scorpio X-1.

The spacecraft was launched from the San Marco platform off the coast of Kenya, Africa, into a near-circular, equatorial orbit. This spacecraft contained four instruments: the Extragalactic Experiment, the Galactic Monitor Experiment, the Scorpio Monitor Experiment, and the Galactic Absorption Experiment. In the orbital configuration, the spacecraft was 145.2 cm high and the tip-to-tip dimension was 470.3 cm. Four solar paddles were used in conjunction with a 12-cell nickel-cadmium battery to provide power over the entire orbit. The spacecraft was stabilized along the Z axis and rotated at about 0.1 deg/s. Changes to the spin-axis orientation were by ground command, either delayed or in real time. The spacecraft could be made to move back and forth plus or minus 2.5 deg across a selected source along the × axis at 0.01 deg/s. The experiments looked along the Z axis of the spacecraft, perpendicular to it, and at an angle.