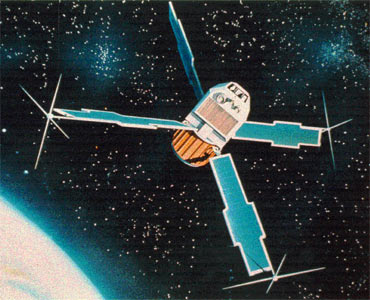 SAS A (Small Astronomy Satellite A, also known as Explorer 42 or Uhuru) was the first in the series of small spacecraft whose objectives were to survey the celestial sphere and search for sources radiating in the X-ray, gamma-ray, UV, and other spectral regions. The primary mission of Uhuru was to develop a catalog of celestial X-ray sources by systematic scanning of the celestial sphere in the energy range from 2 to 20 keV.

The spacecraft was launched 12 December 1970, from the San Marco platform off the coast of Kenya, Africa, into a near-circular equatorial orbit. The orbiting spacecraft was in the shape of a cylinder approximately 56 cm in diameter and 116 cm in length. Four solar paddles were used to recharge a 6 amp-h, eight-cell, nickel-cadmium battery, and to provide power to the spacecraft and experiment. The spacecraft was stabilized by an internal wheel, and a magnetically torqued commandable control system was used to point the spin axis of the spacecraft to any point of the sky. The aspect sensing system consisted of both a star and sun sensor that shared the same processing electronics. The system was designed with heavy emphasis on redundancy, not only in the more obvious areas such as aspect sensors and high- and low-voltage power supplies, but also in signal switching and high-voltage distribution. The resulting instrument was capable of sustaining several simultaneous major failures without seriously compromising the scientific objectives. Data were stored on a one-orbit storage tape recorder and telemetered during a 3.4 minute playback cycle. A 1000 bps PCM/PM system was used.