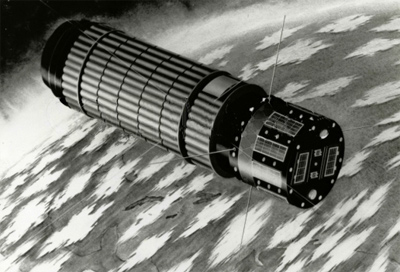 Its purpose was to obtain data on the near-earth meteoroid environment, thus providing an accurate estimate of the probability of penetration in spacecraft structures by meteoroids and allowing a more confident definition of the penetration flux-material thickness relation to be derived.

S 55c was significantly modified from the three earlier S 55 satellite. The cylindrically shaped spacecraft, about 61 cm in diameter and 234 cm long, was built around the burned out fourth stage of the Scout launch vehicle, which remained as part of the orbiting satellite. Explorer-23 carried stainless steel pressurized-cell penetration detectors, impact detectors, and cadmium sulfide cell detectors to obtain data on the size, number, distribution, and momentum of dust particles in the near-earth environment. In addition, the spacecraft was designed to provide data on the effects of the space environment on the operation of capacitor penetration detectors and solar-cell power supplies. The spacecraft mass, neglecting the fourth stage vehicle hardware and motor, was 96.4 kg.

The spacecraft operated satisfactorily during its 1 year life (November 6, 1964, through November 7, 1965), and all mission objectives were accomplished, except for the cadmium sulfide cell detector experiment, which was damaged on liftoff and provided no data.