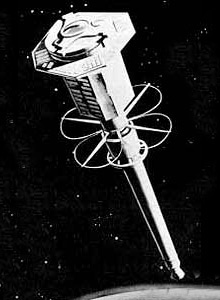 Explorer 11, also known as S 15, was the first satellite to be launched for the purpose of detecting the sources of high-energy gamma rays.

In addition to detecting gamma rays, Explorer 11 was designed to map their direction with emphasis on the plane of the galaxy, the galactic center, the sun, and other known radio noise sources; to relate the measurements to the cosmic-ray flux density and the density of interstellar matter; and to measure the high-energy gamma-ray albedo of the earth's atmosphere. The satellite was a spin-stabilized octagonal aluminum box (30.5 by 30.5 by 58.5 cm) on a cylinder (15.2 cm in diameter and 52.2 cm long). Explorer 11 was constructed so that its stable motion was an end-over-end tumble about the transverse principal axis that had the largest moment of inertia. The gamma-ray telescope assembly was mounted so that its axis of sensitivity, which was parallel to the long axis of the satellite, would rotate in the plane of tumble. The orientation of this axis in space was determined to approximately 5 deg by means of optical aspect detectors and the use of the known radiation pattern of the vehicle antenna. Telemetry was provided only in real time by two PM transmitters, since the onboard tape recorder failed at launch.