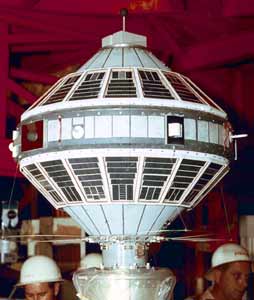 Explorer 7 (S-1) was launched using a Juno 2 rocket. Its mission was to measure the earth's radiation balance. It was destroyed by the Range Safety Officer 5-1/2 seconds after liftoff because of a failure of the power supply to the guidance system.

Explorer 7 was designed to measure solar X-ray and Lyman-alpha flux, trapped energetic particles, and heavy primary cosmic rays (Z>5). Secondary objectives included collecting data on micrometeoroid penetration and molecular sputtering and studying the earth-atmosphere heat balance. The spin-stabilized satellite's external structure consisted of two truncated conical fiberglass shells joined by a cylindrical aluminum center section. The spacecraft was 75 cm wide at its equator and about 75 cm high. The spacecraft was powered by approximately 3000 solar cells mounted on both the upper and lower shells. Additional power was provided by 15 nickel-cadmium batteries that were positioned on its equator near the outer skin as an aid in maintaining a proper spin rate. Two crossed dipole (1 W, 20 MHz) telemetry antennas projected outward from the center section, and a 108 MHz antenna used for tracking was mounted on the bottom of the lower shell. Located around the periphery of the center section were five bolometers for thermal radiation measurements and three cadmium sulfide micrometeoroid detector cells. A cylindrical ion chamber (lithium flourid window) and a beryllium window X-ray chamber were located on opposite sides of the upper cone, and a cosmic-ray Geiger counter was located on the very top. A primary cosmic-ray ionization chamber was located within the center portion of the upper cone. Useful real-time data were transmitted from launch through February 1961 and intermittently until 24 August 1961.