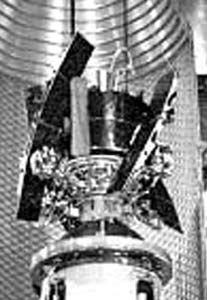 This RAE-B (Radio Astronomy Explorer B) mission was the second of a pair of Radio Astronomy Explorer satellites. It was placed into lunar orbit on 15 June 1973, to provide radio astronomical measurements of the planets, the sun, and the galaxy over the frequency range of 25 kHz to 13.1 MHz. The experiment complement consisted of two Ryle-Vonberg radiometers (nine channels each), three swept-frequency burst receivers (32 channels each), and an impedance probe for calibration. The experiment antennas consisted of a 229-m upper V-antenna pointed away from the moon; a 183-m lower V-antenna pointed toward the moon; and a 37-m dipole antenna parallel to the lunar surface. The lower V-antenna was extended to its full 229-m length in November 1974. The spacecraft body was a truncated cylinder 36.25 in. in diameter and approximately 31-in. high, with four fixed solar paddles. The maneuvering system consisted of a hydrazine velocity correction package, a cold gas attitude control system, and a solid fuel lunar insertion motor. Data were returned to the earth via either a low power UHF/(400 MHz) transmitter, in real time, or stored in an onboard tape recorder and transmitted to earth via a high power UHF transmitter (400 MHz). Two tape recorders provided backup storage. A VHF transmitter served primarily for range and range-rate measurements and as a backup. Commands were received on a VHF (148 MHz) receiver, which also was a part of the range and range-rate system. Spacecraft attitude was determined by

and was accurate to 1 deg. The spacecraft was gravity gradient oriented (Z axis parallel to local vertical) and was equipped with libration dampers to damp out oscillations.