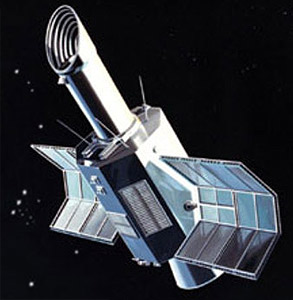 The IUE (International Ultra-Violett Explorer, formerly SAS-D) satellite was a ultraviolet astronomical observatory for use as an international facility. The IUE contained a 45-cm telescope solely for spectroscopy in the wavelength range o 1150 to 3250 A. The satellite and optical instrumentation were provided by the Goddard Space Flight Center (GSFC). The television cameras, used as detectors, were provided by the United Kingdom Science Engineering Research Council (SERC, formerly UKSRC). The European Space Agency (ESA, formerly ESRO) supplied solar paddles for the satellite and a European Control Center. After launch, two-thirds of the observing time was directed from a control center at GSFC; one-third of the time the satellite was operated from the European Control Center near Madrid. The IUE observatory was in a quasi-synchronous orbit.

The 45 cm Ritchey-Chretien f/15 telescope fed a spectrograph package. The spectrograph package, using secondary electron conduction (SEC) Vidicon cameras as detectors, covered the spectral range from 1150 to 3250 A, operating in either a high- or low-resolution mode with resolutions of approximately 0.1 and 6 A, respectively. The SEC Vidicons could integrate the signal for up to many hours. At high resolution, spectra of stellar sources were obtained as faint as 12th magnitude, while at lower resolution, observations had been made of sources fainter than 17th magnitude. The latter observations required 14 hours of integration time.