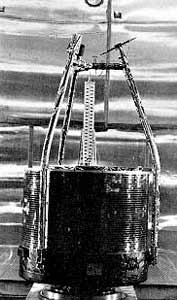 The purposes of the mission were:

The three spacecraft carried a number of complementary instruments for making measurements of plasmas, energetic particles, waves, and fields. The mission thus extended the investigations of previous IMP spacecraft. The mother/daughter portion of the mission consisted of two spacecraft (ISEE 1 and ISEE 2) with station-keeping capability in the same highly eccentric geocentric orbit with an apogee of 23 Earth radii. During the course of the mission, the ISEE 1 and ISEE 2 orbit parameters underwent short-term and long-term variations due to solar and lunar perturbations. These two spacecraft maintained a small separation distance, and made simultaneous coordinated measurements to permit separation of spatial from temporal irregularities in the near-Earth solar wind, the bow shock, and inside the magnetosphere. By maneuvering ISEE 2, the inter-spacecraft separation as measured near the Earth's bow shock was allowed to vary between 10 km and 5000 km; its value is accurately known as a function of time and orbital position.

The spacecraft were spin stabilized, with the spin vectors maintained nominally within 1 degree of perpendicular to the ecliptic plane, pointing north. The spin rates were nominally 19.75 rpm for ISEE 1 and 19.8 rpm for ISEE 2, so that there was a slow differential rotation between the two spacecraft. The ISEE 2 body-mounted solar array supplied approximately 112 Watts at launch. The ISEE 2 data rate was 2048 bps most of the time and 8192 bps during one orbit out of every five (with some exceptions).

Both ISEE 1 and ISEE 2 re-entered the Earth's atmosphere during orbit 1518 on 26 September 1987. Seventeen of 21 on-board experiments were operational at the end.ISEE (International Sun Earth Explorer)

ISEE 2 was not considered part of the Explorer program as it was provided by ESA.