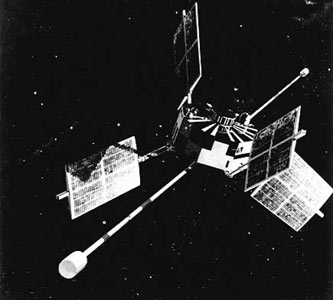 IMP F (Explorer 34, Interplanetary Monitoring Platform) was placed into a high-inclination, highly eccentric earth orbit. The apogee point was located near the ecliptic plane and had an initial local time of about 1900 h. The spacecraft was spin-stabilized and had an initial spin period of 2.6 s. The spin vector was approximately perpendicular to the ecliptic plane. Like the earlier IMPs, this spacecraft was instrumented to study interplanetary magnetic fields, energetic particles, and plasma. The spacecraft optical aspect system failed on 4 March 1969. Otherwise, useful data were acquired until just before spacecraft reentry, which occurred on 3 May 1969.

IMP-G (Explorer 41) was a spin-stabilized spacecraft placed into a high-inclination, highly elliptic orbit to measure energetic particles, magnetic fields, and plasma in cislunar space. The line of apsides and the satellite spin vector were within a few degrees of being parallel and normal, respectively, to the ecliptic plane. Initial local time of apogee was about 1300 h. Initial satellite spin rate was 27.5 rpm. The basic telemetry sequence was 20.48 s. The spacecraft functioned very well from launch until it decayed from orbit on 23 December 1972. Data transmission was nearly 100% for the spacecraft life except for the interval from 15 November 1971, to 1 February 1972, when data acquisition was limited to the vicinity of the magnetotail neutral sheet.