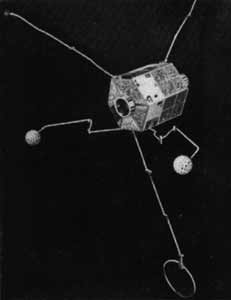 Injun 5 (Explorer 40) was a 71 kg magnetically oriented spacecraft and was launched by a Scout-B rocket, together with a 3.65-m inflatable balloon (Explorer 39) used for air density measurements. Injun 5 was designed to accomplish the following objectives:

Following instruments were on board:

The spacecraft systems performed normally except for the malfunction of the solar cell power dump device (shortly after launch) which caused the solar cells to deliver a lower power level to the experiments and reduced the time during which the onboard tape recorder could be run. The passive magnetic alignment became effective in mid-December 1968. The spacecraft was turned off from 31 May 1970, to 18 February 1971, after this period it was turned on again. The spacecraft was put in an operational off-mode in early June 1971, and became inoperable shortly thereafter.

A back up satellite was built, but not launched. It was donated to the Smithsonian National Air and Space museum.