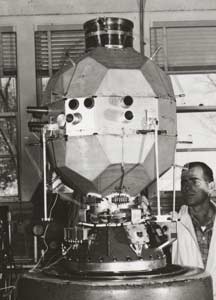 Injun 4 (Explorer 25) was a magnetically aligned satellite launched simultaneously with Explorer 24 (AD-B) (Air Density experiment) using a Scout-X4 rocket. The satellite's primary mission was to make measurements of the influx of energetic particles into the earth's atmosphere and to study atmospheric heating and the increase in scale height which have been correlated with geomagnetic activity. Studies of the natural and artificial trapped radiation belts were also conducted.

A biaxial fluxgate magnetometer was used to monitor the orientation of the spacecraft with respect to the local magnetic field. Injun 4 was equipped with a tape recorder and analog-to-digital converters. The satellite power was derived from rechargeable batteries and solar cells. A transmitter operating in an AM mode at carrier frequency 136.29 MHz was used to transmit real-time data, and one operating in a PM mode at 136.86 MHz was used to transmit tape recorder data. Stable magnetic alignment was not achieved until late February 1965. The satellite sent radiation data until December 1966 and is expected to be in orbit for about 200 yr.