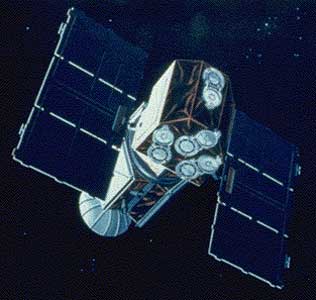 The Extreme-Ultraviolet Explorer (EUVE) was a spinning spacecraft designed to rotate about the earth/sun line. EUVE was a part of NASA's Explorer spacecraft series, and designed to operate in the extreme ultraviolet (EUV) range of the spectrum, from 70 - 760 Angstroms. This spacecraft's objective was to carry out a full-sky survey, and subsequently, a deep-survey and pointed observations. Science objectives included discovering and studying UV sources radiating in this spectral region, and analyzing effects of the interstellar medium on the radiation from these sources.

The full-sky survey was accomplished by three Wolter-Schwarzschild grazing-incidence telescopes (188 kg each). During the sky survey, the satellite was spun three times per orbit to image a 2 degree wide band of sky in each of four EUV passbands. The deep-survey was accomplished with a fourth Wolter-Schwarzschild grazing-incidence telescope (323 kg) in the anti-Sun direction along the ecliptic, within a 2 × 180 degree region of sky. This telescope was also used for three-EUV bandpass spectroscopy of individual sources, providing ~ 1-2 Angstrom resolution spectra. The science instruments were attached to a Multi-mission Modular spacecraft (MMS). The MMS was 3-axis stabilized, with a stellar reference control system and solar arrays.

The EUVE mission was extended twice, but cost and scientific merit issues led NASA to a decision to terminate the mission in 2000. EUVE satellite operations ended on January 31, 2001 when the spacecraft was placed in a safehold. Transmitters were commanded off on 2 January 2001. EUVE re-entered the Earth's atmosphere over central Egypt at approximately 11:15pm EST on 30 January 2002. The mission is considered a success since it accomplished its scientific, technological, and outreach goals.

It was designed for on-orbit servicing by the Shuttle, so that the EUVE payload module could be exchanged in orbit by the XTE payload module, but the service / exchange Shuttle mission was cancelled. EUVE was also called BERKSAT (Berkeley Satellite).