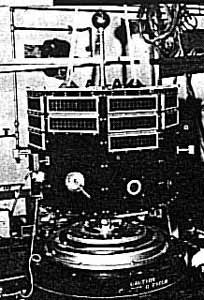 DME (Direct Measurement Explorer) or Explorer 31 was a small ionospheric observatory which worked in conjunction with the canadian Alouette 2 satellite. It was instrumented to make direct measurements of selected ionospheric parameters at the spacecraft.

Since the spacecraft had no tape recorder, data could be observed at the spacecraft only when the spacecraft was in sight of the telemetry station and when commanded on. Experiments were operated either simultaneously or sequentially, as desired. The satellite was spin-stabilized with the spin axis perpendicular to the orbit plane. The spin rate and spin axis were controlled by an onboard magnetic torquing system. The attitude and spin rate information were observed by a sun sensor and a three-axis magnetometer.

Satellite performance was satisfactory except for a partial power failure in May 1966, which reduced data acquisition time to about half the nominal amount. Some difficulties were encountered in obtaining attitude information that was necessary for the reduction of the experiment observations. On 1 July 1969, the satellite data observations were terminated with five of the seven experiments operating. Responsibility for standby monitoring of the satellite was given to the ESSA telemetry station at Boulder, Colorado, on 8 July 1969. During this standby operation, experiment data were collected only once on 1 October 1969, for 9 min from the electrostatic probe for use in studying a red arc event. On 15 January 1971, no response was received from a variety of satellite commands, and the satellite was abandoned.